I have nothing to offer but blood, toil, tears and sweat and more..... 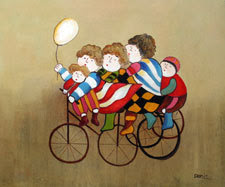 I have never had a more challenging job than this. Being a full time housewife and mom is hard. I am physically, mentally, horizontally and vertically challenged. I take my hat off to all mom who has been doing this all their lives. This includes my mother who has seven children. No wonder she was weird when I was young. Now I understand.
I have only two children but some days I feel like I have a battalion. How do you get them to listen to you without repeating the same sentence 10 times in a span of 5 minutes? Yes, it is only a simple instructions like "let's go", "switch it off", "shoes on please". Give me $100m project anytime, I will make sure that its profitable. I will make it work. Kids, how do I deal with them? And why am I still complaining that I need "challenge"? For god sake, I have ample. All I need to do is to LIVE it and EAT it.
BUT there is nothing more satisfying than seeing them on the bike, pedalling on 2 wheels, soaking wet in the tropical rain, laughing. There is nothing more satisfying than when they say "Thank you mummy, I really had a great day today".
Love is such a simple word but even the most eloquent writer is not able to describe it.

When one mentioned "soul mate", many associates it with a lover/partner/husband/wife. That's what I thought too. I have changed my perspective sometime ago.

I have defined soul mate (s) as someone:-

I am honoured to have not met one but many soul mates and consists of both sexes. They are my pillars of strength. My lifeline. The people I would like to have at my dinner table every night. If only we could all live in one house and sleep together in one bed. If only they are each others soul mates, then maybe that could happen?

"People think a soul mate is your perfect fit but a true soul mate is a mirror, the person who shows you everything that's holding you back, the person who brings you to your attention so you can change your life. A true soul mate is probably the most important person you'll ever meet, because they tear down your walls and smack you awake. But to live with a soul mate forever? Nah. Too painful. Soul mates, they come into your life just to reveal another layer of yourself to you and then they leave AND thank God for it".

A childish rebellion
Surely, but slowly in a shallow form
Seeking an expression
And direction, like a rushing stream
The bubbling restless force
At times formed by circumstances
A stream by its banks
Refusing to be contained by them
The spirit of a wild horse
Not knowing its boundaries or distances
Never to be held by any hand
Unwilling to stop at any realm
Restless forms ducking under obstacles
Splashing and passing over them
Testing life very oracles
Moving and changing forms
To some a sense of rhythm
An imagination of the restless
Burn the candle at both ends
Whilst it burns, you want it to last, no less
Keep still oh fluttering heart
Surely after a storm there is a lull
For the calmness is in your heart
It is never, never too hard
Regu gave me this poem in January 1997. I lost his business card and can't remember his long family name. He is someone I met during a International Fast Ferry exhibition more than 10 years ago. He gave me many words of wisdom when he sensed that I was somewhat "lost". He guided me without him knowing. I know he lives in Penang with his family. Our last contact was in Perth in 1998 and he was not well. I wish I could see him again.
Painting by Elizabeth Clausen 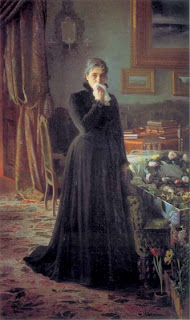 Grieving for the faces I cannot remember, the smiles that I cannot see, the hands I cannot hold, the laughter I cannot hear. Time to let go and move on but why is it so difficult?
Grieving for my firstborn who insisted that she doesn't need me to send her to school. Her first time to school by herself. She went on her scooter. I was behind her all the time trying to keep up but she was too fast and she didn't even look back. Where does the time go?
Grieving for my youngest who is down with mononucleosis. Rashes all over his body and is feeling itchy, sore throat and lethargic. He has not been sick since as long as I can remember. Maybe its the way his body is telling me that he is affected by this move. If only I could transfer the pain to me.
Grieving for the sadness that I am feeling but can't make myself to cry.
Painting by Ivan Kramskoi - a Russian painter

We are moving into a new home

Our belongings have been delivered to our house in Singapore today and we will be moving in tomorrow.

The kids are happy to have their toys, books and bed back. I am happy just to have my bed back. Having familiar things around make it feel like home.

Albeit being small which we need to adjust to, the house has a homely feeling about it and I love it at first sight.

The kids will be in separate bedrooms for the first time and I wonder how this arrangement will work. Let's see.

Every house has a story and I am excited to experience what this house will bring us.

I am looking for an answer as to why I am so restless.
I was restless when I was in Perth. I was eager to move to new land and experience new adventures. Now I am in the new land, I am eager to feel settled. For what? Back to routine. Now I understand why people I love said I am difficult.
Someone I love said that I have no sense of time. The same person has also said that I have ADHD. I am trying to connect these two together to understand myself. Am I trying to do too many things in such a short time or am I trying to not to think about time so I could achieved what I wanted irrespective of how long it took.
Someone has given me a poem 15 years ago titled "Restless Heart". Its somewhere in the Indian Ocean now. Once I found it in the next two weeks, I will post it in this blog. I thank that friend for being there for me at the time. I wish I could meet him again and have another deep and meaningful conversation to help me get my compass right again.