My Daddy - The Champ 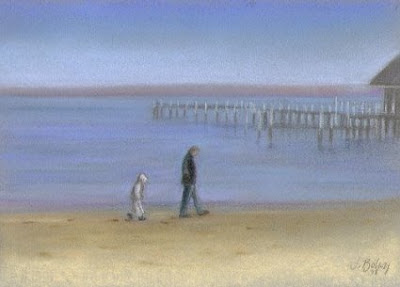 I had spent 2 solid long weeks with my dad last week. I am glad that I did it. We had good chats in the car, talking about cars, about us, about the family and the good old days. Topics that we used to talked about when he was driving long distance and I would stay awake to keep him company while the rest were asleep. This time around I was driving him.
When I was growing up, I always thought of him as the rock, the ultimate decision maker. When he said no, nobody in the family can dispute that. He rarely lost his cool. We were always his priorities and maybe still are. I remember him as the father who made sure that no mosquitoes will bite us when we were asleep. He didn't read to us or tuck us in before we go to sleep like western father does, but alas he would made sure that we had our blanket on and mosquito coil was lighted to ward off mosquitoes.
He was a teacher, a great one too because his ex-students would came up to him and gave him a hug or introduced themselves, shake his hands and would tell him what they have became. His salary was RM1,200 when he retired in 1980's. There were 7 of us but we have never felt that we didn't have enough money. There were really good food on the table everyday, we had crabs and lobsters by the buckets. Life with my dad was really, really good. I had a great childhood with him.
This September, my dad will be 75 years old. He was no longer the rock. He has Parkinson. A mild one. He has lost many of his good friends. He is no longer the jovial person I used to know. I have to help him make decisions for him and the family. I have to take him to see the doctors. It is my turn now to take care of him. I pray, that I could take care of him just the way he took care of me.
When we were away in Malaysia for 2 weeks, my daughter wrote a poem and a letter to her dad:

My Dad the Champ
My dad spreads love everywhere
My dad is strong, he can lift both of us
He is not afraid of anything
He is always here for me
But most of all, he loves me
He works hard for money
Money becomes things
Things becomes feelings
Feelings become love
I miss you so much when we are in Malaysia. I hope next time we go to Malaysia, you could come too. We had so much fun and there are lots of fun things and parks there. I want to show you right here, right now. We might come home earlier. I hope you love the poem and mostly ME.

I hope that she would have the same relationship with her dad as I have with my dad.
Painting by Johanna Bohoy. See her works at http://www.dailypainters.com/paintings/42901/Father-Daughter-Walk/Johanna-Bohoy

We had a quiet birthday party yesterday for the two monkeys. One turned 5 and the other turned 8. I can still remember my childhood when I was 8. I also remember my childhood memories when I was 5 going to the shop in my undies only. Nothing else on and the weather was hot and humid. I was told to put on more clothes if I want to go to the shop when I turned 8.
Today, school holiday starts and it will resume in mid August. What do I do with two monkeys for that long? This is the first time that I will be staying at home while they have their school holidays. Who came up with this idea of a 2 months school holidays? I know its a beautiful summer in Canada but what do I do in this humid, hot 40 degree C country?
I (not "we" , yes have ditched democracy), have decided that these are what we will be doing (with some consultation, of course for Chairman's approval):
15th June - 28th June: Malaysia between Pagoh, Melaka and Kuala Lumpur
29th June - 8th July: Singapore and entertain a friend who is coming from Japan and attend our 1st Chinese wedding at the Raffles
9th July - 13th July: Kuching, Rainforest Music Festival and a friend 40th birthday
14th July - 25th July: Perth, Australia
26th July - 30th July: Kuala Lumpur
1st Aug - 8th Aug: Mantaray Bungalow, Kuala Terengganu
9th Aug - 16th Aug: Singapore museums and Bintan
Can anyone (including moi) complaint that they are bored to death? Unfortunately, P can only join in some of the activities as someone has to make the money for someone to spend. We are doing it only to boost the global economy. The world needs us.
The photo is an image of a "supernova".
A supernova (pl. supernovae) is a stellar explosion. Supernovae are extremely luminous and cause a burst of radiation that often briefly outshines an entire galaxy, before fading from view over several weeks or months. During this short interval, a supernova can radiate as much energy as the Sun could emit over its life span.

One day James said “ I’m bored, I want to go somewhere exciting, somewhere off this planet. I want to go to the moon. Centipede, can you go with me to the moon? ” “Sure kid, except I don’t know how to ride a rocket ship and I don’t even have one ” said Centipede.

Soon they got hungry and they ate a sandwich and a soda. James didn’t drink the soda. He put it on his jetpack controls. Soon they got sleepy. They lied down and started snoring. Just then the soda fell. “Oh no, the soda fell on the controls, we are going to crash on that planet. According to the guidebook, it says that we are on Pokeplanet” said James.

They crashed. James and Centipede walked on and on until they reached a jungle. They saw this creature. It was like goo. It said, “ Hi, my name is Ditto. I am a pokemon and I can turn into anything you want. I want to go for an adventure with you guys”. “Sure, you can come with us” said James. “Hooray, I finally have an owner” said Ditto.

Suddenly an Indian popped out of nowhere. “Please help us, Treecko’s leafball is lost. The legend says once Treecko has lost his leafball, he will destroy everything in its path. So, please help” said the Indian. “Don’t worry, will help you, right James?” said Centipede. “OK” said James.

So off the four of them went searching for the Treecko’s leafball. They saw this pyramid, the shape of Treecko” “Look, let us search in here” said Ditto. When they went in, they past boulders, pit traps. Ditto had to battled with all kinds of weird creatures that James has never seen on earth.

“Look, that must be the leafball. Let’s get it” said Centipede. But then a Machamp popped out and said “I’m using Treecko to destroy the whole planet”. Ditto turned into an electric type Pokemon. Ditto nearly lost all his health but the final hit killed the Machamp. James returned the leafball to Treecko. That planet lived happily.

Original work of my 8-in-3-weeks SGT. Charaters are from James and the Giant Peach and the Pokemon world. She has always been a good storyteller since she knew how to write. She has been awarded "The Greatest Storyteller and Story Animator" for Grade 2 at school yesterday. This is one of her many stories that she has written. I love the suspense!!